John Schuster ran an update on my story in his Tucson Weekly column, updating recent media appearances and discussing how my current novel, The Dark, is doing in terms of reviews and the attention it's attracting.  Follow this link to see the full article (scroll down to my section, which is about halfway down).

You may remember that a few weeks back Kirkis Reviews named me as a "2015 Author to Watch." Now it's weighed in with a review of my latest novel--and the news is fabulous.  Kirkus calls the novel a non-stop "thrillfest" and a "rollicking adventure" from top to bottom.  Check out the full review here.

Jim Parisi invited me to update listeners about the rave reviews my new novel, The Dark, is getting, and also to discuss my recent and

Michael Malone of radio station WVOX, serving New York state, invited me to appear on his program, "Books and Beer," to discuss my writing and life challenges.  Find the aircheck here (move the slider to 28:50, which is where my portion of the interview begins).

John Schuster of the Tucson Weekly just penned this amazing update of my rapidly developing medical circumstances, and noted that I will be devoting more time directly to my writing going forward.

Broadcasting and Cable Magazine recently featured me in an article about news directors who change careers.   Here's the link (requires subscription).

What a treat!  I had a chance to appear on Coast to Coast AM, broadcasting on more than 600 radio stations nationwide!  We discussed zombies, the apocalypse, lost civilizations, and more, all in the context of my novel, A Journal of the Crazy Year.

Appearance on the Pete O'Shea show (WTIS-AM Tampa) to discuss A Journal of the Crazy Year.  WTIS is a Christian format radio station, and we discussed the spiritual elements in the novel.

Appearance on the Write On! Four Corners program in Farmington, New Mexico to discuss A Journal of the Crazy Year.  This was fun!    All of the action in the novel takes place in New Mexico (I spent some time in Albuquerque as a TV news director).

My essay, Journalism's New Age of Shoddy, which appeared on the RTDNA.org website, was discussed on Tri States Public Radio.

Appearance on the John C. Scott radio show to discuss A Journal of the Crazy Year.

I appeared on the Jim Parisi radio show to discuss A Journal of the Crazy Year, the real-life plague and ripped-from-the-headlines facts that inspired it, and the great reviews it's getting.  Check it out here.

A Journal of the Crazy Year gets a great review from Publishers Weekly!  It calls the novel "a fascinating read all the way to its chilly, barely hopeful conclusion."

The Tucson Weekly had some very nice things to say about the election coverage I participated in at my radio station, KEVT PowerTalk 1210.

Another Tucson Weekly article--this one about my station, KEVT, and my move to afternoon drive (scroll down to the third section.)

Book review of Messages on MoCoVox.com

Appearance on KGUN9-TV's "The Morning Blend" to discuss Messages

Article about my writing in Broadcasting & Cable

Messages mention in The Brainpan

Messages mention in Rick Gevers' Newsletter (after clicking link, scroll down to view)

Article about my break from TV news in Inside Tucson Business

Below is an updated selected list of links to books, news stories, and blog entries that have referenced me, my writing or my work, and also media appearances I have made.

Ad panel from The Arkansas Democrat 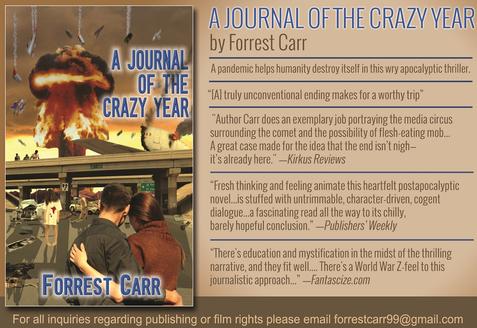 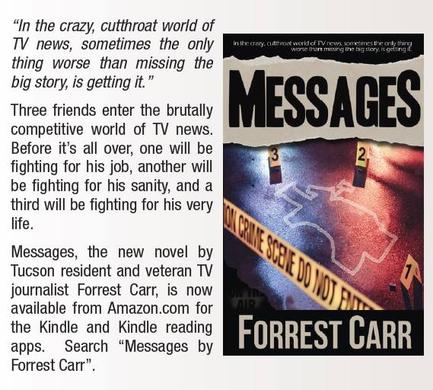 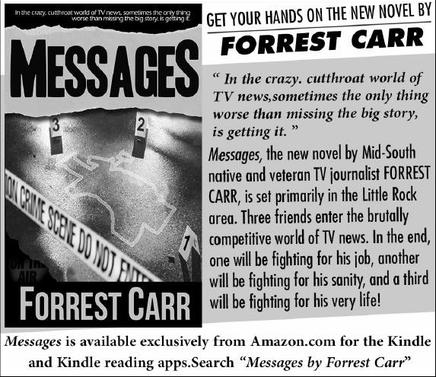