Newsgathering in a Post-Snowden World

identities of its fictitious aviation companies.

New Media "values" are causing Old Media practitioners to lose their ethics, and their minds.

Now that we've taken a look at what doesn't work (see below) let's examine what does.

An hilarious look at some real-life job application misfires.

Some personal thoughts on my personal rebellion against my parents' smoking, written for the Fort Lauderdale Sun-Sentinel.  Note:  the original article is behind a subscription wall; the link above takes you to the article on my blog).

Sad to say, newsmakers, including public officials and supposedly professional public information officers, sometimes retaliate against reporters with inappropriate verbal attacks and/or threats -- up to and including physical ones.  When that happens, the news director's response, or lack thereof, can make or break the reporter.

Just Say No to TV Speak

Ever wonder why TV anchors sometimes seem to be speaking a different language?

When Viewers Turn On You

Viewers can be really nasty, as one small market station recently learned.  Lashing out at them is not the answer.  So what is?

Even a casual glance at the media today suggests that accuracy is becoming a disfavored concept.   Is it time to give it up?  This article, published on the Radio Television Digital News Association website, explores that question.

The Facts about Viewer Advocacy

3/20/2014
Ever wonder what drives TV news coverage decisions?  Concerned about the spread of politically-flavored TV news?  Check out this post, written for the Radio Television Digital News Association (many thanks to the RTDNA for posting).

11/22/2013
Some thoughts on the anniversary of the JFK assassination, written for the Tucson Sentinel.

Getting the Last Word, and Why It Matters

I'm particularly proud of this piece I wrote for KGUN9.com (and also for RTDNA.com) about the efforts of Ben's Bells to spread kindness in the wake of a mind-boggling tragedy.  This is the type of story that should be making headlines.  Yet for the most part (KGUN's coverage was an exception) they don't.   Do you ever wonder why?

Six Conflicting Headlines:  Who's telling the truth?  And how do you know?

If you want to know why the media so often trips over its feet in the headlong rush to be first at all costs, read this.  The article, written for KGUN9's website, has never been more relevant to what's going on in journalism today.  A version of this also was published on the RTDNA (Radio Television Digital News Association) website.

Viewer Advocacy:  Going After the Powerful and an Audience Too

This article, written for the Poynter Institute, explores the "Viewer Advocacy" news philosophy, which I played a role in developing.

One of the most difficult stories for which I ever had to direct coverage was the kidnapping and murder of Carlie Brucia in Florida, an abduction that was caught on security video.  For a brief period of time after police issued the Amber Alert and released the video to us, we believed we stood a chance of helping to find the girl.  So we flooded the airwaves with coverage.  Afterwards, some critics accused the media of exploiting the case.  This essay was my response.

One of my few forays into political commentary.  Unless we're paid as columnists or commentators, journalists are expected not to express opinions.  But I felt leeway to do that when and if responding to attacks on coverage, and my employer at the time of this essay (Media General) was great about letting me do that.  In the lead-up to the Second Gulf War, some viewers savagely attacked any coverage that presented the viewpoints of those opposing the war (viewer commentary is a topic I address very directly in my novel Messages.)   An earlier version of this piece was first printed in Media General's Tampa Tribune daily newspaper, and then the Chicago Tribune printed this version  (the original is no longer available on the Tribune website, so I recopied it at the link above.)

Inviting Viewers into the Newsroom

When we first launched the Viewer Advocacy news philosophy and its Viewers' Bill of Rights at KGUN9 in 2000, it garnered quite a bit of attention in the trade press.  Tom Rosenstiel and Bill Kovach mentioned the Viewers' Bill of Rights in their book, The Elements of Journalism.  Harvard University's Nieman Reports then invited me to pen this essay about the principles involved.

The Tampa Model of Convergence

When I was news director at WFLA-TV in Tampa, we worked closely with our sister newspaper, The Tampa Tribune.  This type of cross-platform cooperation is a philosophy known as "multimedia convergence."  At the time, we were one of the very few local news organizations in the world combining a major metropolitan newspaper, a TV station, and a website under one roof.  So we got asked about it a lot.  This is one of the articles I wrote on the subject at the time.  I thought then (and still do) that convergence, when it was at its best, was a fabulous newsgathering tool, one that provided greater service to the consumer while also giving the news organizations a competitive edge.  Here's a question for today's journalism students:  do you think these principles still hold up today?

One of the joys of convergence was that I often got to attend journalism conferences with my print colleagues.  One of them was the 2001 "Let's Do It Better!" workshop at the Columbia Graduate School of Journalism.  I had a personal interest, because diversity is very important to what I was trying to accomplish with the Viewer Advocacy news philosophy.  The gathering was fabulous.  To my shock, they allowed me -- a broadcaster -- to write about it for a respected print journalism publication.  This article originally appeared in The American Editor. 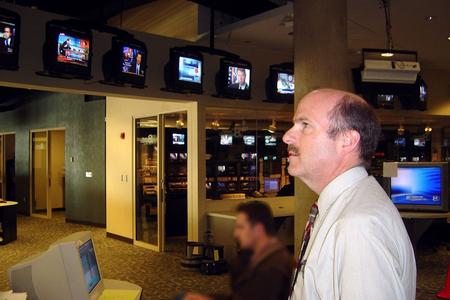 Below is a selected list of published essays and opinion pieces I've written.  Mainly, these are about journalism, but there is a smattering of other subjects, too.