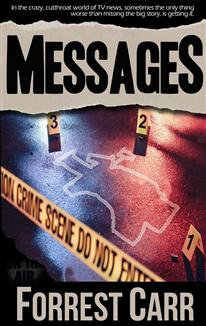 "And what did the boss say?" Regina demanded.
Austin locked eyes with her. "He said our stories need more vagina."
Regina recoiled as if Austin had poked her with a sharp stick. "He said what?"
Austin held his hand up. "As God is my judge. That was the word he used."

What kind of crazy newsroom is this? It's the kind that three friends encounter as they embark on a broadcast journalism career at the height of the Golden Age of TV News. In their quest for Truth, Justice, and Ratings, they'll risk it all, battling profit-minded owners, idiotic managers, dishonest businessmen, out-of-control public officials, and dangerous criminals. Before it's all over, one will be struggling to keep his job, another will be fighting for his sanity, and the third will be in a fight for his very life. Written by Forrest Carr, an award-winning 33-year veteran of local TV news, Messages gives a never-before-seen glimpse into the inner workings of local television newsrooms and of the journalists who work and struggle within them.

Five Stars.  A very frank and honesty portrayal of the quirky side of the news business. The character development is great and the story moves fast. It's hard to put the book down once you've started.

Five Stars.  Forrest Carr has absolutely nailed it. The author is a television newsroom veteran and it shows. The insane characters and off the wall quirky personalities make you feel like you are reading M*A*S*H, only set in a newsroom. I look forward to seeing Arrow and a few of his friends in a sequel and I certainly will never be able to look at a chicken in the same way ever again. A great read!

Five Stars.  I can’t say I’m surprised that Forrest Carr wrote such a fascinating book. He’s a supremely versatile talent. Throughout his career in local TV news, Forrest has built one success after another. Add Messages to the list. The book is entertaining, wickedly funny, and an all around great read. I would have read it in one sitting if my wife hadn’t demanded her iPad back.... Forrest’s description of conduct and conflict in the newsroom will seem too outrageous to be true, but believe me, it’s dead on accurate. The character development is amazing. The story is not predictable. The surprise ending is one you’ll never figure out.  Among the thousand of choices available, I would encourage anyone to buy and read Messages.

A. Brand (from Amazon.com)

Four stars.   Better than Anchor Man. I suppose this is the serious fluff free version of it. The characters in the news room were so very funny and shocking as well.  I enjoyed this book a great deal and often found myself laughing while reading it.

Five Stars.  A great book if you are interested in murder mysteries and are curious about what life was/is like in television newsrooms. As someone who has worked closely with news departments for decades this book is very authentic in the personalities, culture and attitudes of newsroom personnel back in the time period. I had a good laugh in spots because it brought back memories of deeds, attitudes or just plain dumb stunts that I have been a witness to.   The characters of Arrow, Felix and Austin are absolutely believable and the supporting characters are just superb. It's clear that Forrest has had a wealth of experience to build from.  Throughout the book are murders that have the cops denying a serial killer maybe on the loose.  It takes Arrow's investigative skills to piece the evidence together and has a twist at the end that I did not see coming.   I think this is a great first novel and I hope Arrow, Felix and Austin come back in a sequel.

Kirkus Reviews
Journalist Carr's... accomplished debut novel takes readers into the world of local newsroom politics.... Here are the petty turf wars over stories and bylines, the venal and greedy ad-people willing to do anything to increase the station's revenue, the brainless and bullying newsroom bosses.... rendered by Carr in such intricate detail and with such smooth skill that readers will easily gain a vivid sense of what it's like to work in a local newsroom.... Carr weaves a theme of corruption that provides most of the book's considerable comic energy and fast-paced dialogue.

Tim Schwartz, MocoVox.com
Carr's novel is engrossing, fun to read and a joy to see play out to its inevitable, tragic, hilarious and scandalous conclusion... [A] masterful expose of television news.  Take this book home, curl up with it on a weekend and enjoy the guilty pleasures of the 80s from the viewpoint of people who witnessed history and thought they were more important than the news they covered.  You won't be disappointed.

In the crazy, cut-throat world of TV news, sometimes the only thing worse than missing the big story, is getting it.